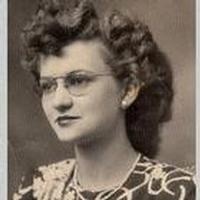 Mary was born August 30, 1929, the youngest daughter of Walter and Bertha Hamner Heinze.

She grew up on the family farm south of Kahoka and after graduating from Kahoka High School in 1946, she worked at Gregory's Variety Store. In 1948, she had the honor of being named the first worthy advisor for the newly organized Kahoka Rainbow Girls organization.

On February 13, 1949, she was united in marriage to Joseph James Garrels at the Evangelical and Reformed Church in Kahoka, MO. She and Joe lived on their farm north of Revere and became parents of three children, Michael, Terri and Tina.

Mary attended Revere Community Church and after she and Joe retired from farming in 1990, they moved to Kahoka and became members of St. Paul United Church of Christ where she had attended growing up.

Mary enjoyed being a farm wife and raising her children. She loved being Grandma Mary to her grandchildren and great-grandchildren. She enjoyed cooking, gardening, sewing and crocheting. She loved watching the wildlife around the farm. Her favorites were cardinals, hummingbirds, and deer. She once experienced a doe looking in the kitchen window at her and once while mushroom hunting, found a large pair of newly shed deer antlers lying together on the ground. She helped her children care for their pets which included dogs, cats, rabbits, parakeets, guppies, and for one memorable summer, a baby raccoon. Every summer she would recruit blackberry pickers along with the family dogs and head to the blackberry patch which meant delicious blackberry cobblers later with homemade ice cream. She played the piano and enjoyed listening to a variety of music, particularly Mantovani, Living Strings, Miller Brothers, and Eddy Arnold. During her retirement, she rescued many orphaned Barbie dolls at yard sales and crocheted them beautiful gowns with each gown being created from a different pattern.

She was preceded in death by her parents; one son, Alan Ray Garrels; one brother, Howard Heinze and his wife, Elizabeth; sister-in-law, Jean Halferty: and, brothers-in-law, Leroy Lillard and Leo Martin.

Funeral services were held Friday, June 22, 2012 at 10:00 a.m. at Wilson Funeral Home in Kahoka with Pastor Marie Paterik officiating. Burial was in the Kahoka Cemetery.

Visitation was held at Wilson Funeral Home after noon on Thursday with family receiving friends from 6-8 p.m.

To order memorial trees or send flowers to the family in memory of Mary Garrels, please visit our flower store.