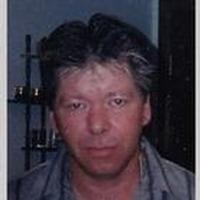 Mark was born February 22, 1960 in Keokuk, IA, a son of Roger and Carolyn Brooks Brammer.

Mark graduated from Clark Co. R-1 High School and shortly after that went to work for the former B.T.R. in Keokuk. He retired from there following a work-related accident.

He was a member of Steelworkers Union Local 444 at Keokuk, a member of the Wayland United Methodist Church, and a social member of Ayer-Boatman Post # 4342, V.F.W. He enjoyed collecting baseball cards and spending time with his many friends and family.

A memorial graveside service was held Saturday, May 31, 2014 at 10 a.m. at the Frazee Cemetery. There was no visitation.

Memorial donations were suggested to the family.

To send a flower arrangement to the family of Mark A. Brammer , please click here to visit our Sympathy Store.

To order memorial trees or send flowers to the family in memory of Mark Brammer, please visit our flower store.