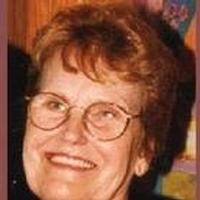 Joan was born December 20, 1933 at her parent's home in Huntsville, IL, a daughter of Anderson and Ada Mae McClain Elder.

She was preceded in death by her parents; a grandson, Jordy Gardin; three great-grandchildren: Jessica McFarland and Robert and Rebecca Cooper; a brother, Jim Elder; and infant sister, Ruth Ilene Elder.

Joan graduated from Bowen High School. She went to work at Drydens and was employed there for a total of 33 years . Following her retirement she enjoyed being a housewife reading, and caring for her grandchildren. She was of the Christian faith.

Funeral services were held Monday, December 12, 2011 at 10 a.m. at Wilson Funeral Home in Kahoka with Rev. Bill Mitchell officiating. Burial was in the Keokuk National Cemetery.

Visitation was held 9 a.m. Monday until time of services at Wilson Funeral Home.

Memorials were suggested to the Alzheimers Association.

To order memorial trees or send flowers to the family in memory of Marilyn Rampley, please visit our flower store.