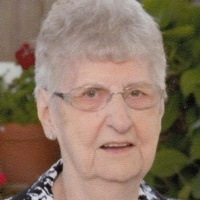 MARGIE R. WATTENBARGER
Margie R. Wattenbarger, age 100, of Kahoka, MO, died Saturday, November 10, 2018 in the Clark Co. Nursing Home in Kahoka where she had made her home since 2015.

The daughter of Frank and Eliza Starnes Moss, Margie was born March 10, 1918 in Unionville, MO. It was there that she met and married Arlo Wilson on April 16, 1935, and they were the parents of two boys, Richard and Clyde. Following Arlo’s death, she married Murl Wattenbarger on April 4, 1984. He also preceded her in death.

She was preceded in death by her parents; two husbands, Arlo Wilson and Murl Wattenbarger; two sons, Clyde and Richard Wilson; a sister, Purvia Fetters; two brothers, Kenneth and Vernie Moss; a half sister, Myrtle Anders; and three half brothers, Marvin, Kersie and Mirl Jump.

She and Arlo moved to Kahoka before the boys started school. She worked at Swift and Co. in Keokuk for 22 ½ years until the plant closed when she was 60 years old.

Margie and Arlo loved square dancing and went to many dances in the Unionville area. Over the years, Margie was very busy raising a large garden and canning the produce. She did a lot of cooking and baking and her pies were treasured by everyone. She was meticulous at whatever she did and she sewed many dresses for her granddaughters and taught many of her grandchildren to sew. She also did embroidery work, crocheted many items, and quilted for family members. She was raised by Christian parents and her faith in God carried her through many tough times in her life.

She cared for two husbands through their illnesses and when it became necessary to enter the Clark Co. Nursing Home in 2015, she did so enjoying the life there, the care they gave, the church services and the visits from others, especially her granddaughters. Any times spent with family, was the best time of her life.

Memorials are suggested to the Clark Co. Ambulance District or O.A.T.S.

To send a flower arrangement to the family of Margie R. Wattenbarger , please click here to visit our Sympathy Store.

Friends may call Thursday after 9 a.m. with family receiving friends from 6-8 p.m.

Friends may call Thursday after 9 a.m. with family receiving friends from 6-8 p.m.

To order memorial trees or send flowers to the family in memory of Margie Wattenbarger, please visit our flower store.