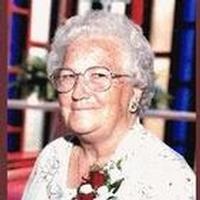 Margaret Ann McCarty, age 80 of St. Francisville, MO, went home to be with the Lord

Margaret was born August 14, 1931 at Danville, IL, a daughter of Jerry Dennis and Geneva Pickett Dodson.

She married Harold Lee McCarty on March 20, 1949 at her parents home in Wyaconda.

Harold was born an hour and a half earlier than Margaret on August 14, 1931, just enough to make him the boss as he would laughingly tell others.

She was preceded in death by her parents; her husband; two brothers, Ruel Dennis Dodson and Rev. Marion Lowell Dodson; a sister, Bertha OBanion; three sisters-in-law; one brother-in-law; two nieces; two nephews; and other relatives.

Margaret graduated from Revere High School in 1949. She formerly worked at Swift and Co. and later Graham Hospital in Keokuk. The majority of her life she spent assisting Harold at their garage in St. Francisville. Her most important job was caring for her children and grandchildren.

She was a member of the St. Francisville United Methodist Church and served as pianist there for a number of years. She loved going to garage sales, crocheting, and collecting salt and pepper shakers and cookie jars. She made each of her children's and grandchildren's birthday cakes.

She was happiest when surrounded by her family.

Funeral services were held Thursday, May 31, 2012, at 10:30 a.m. at Wilson Funeral Home in Kahoka with Pastor Tom Lemons officiating. Burial followed in the Sand Cemetery in St. Francisville.

Memorials were suggested to the St. Francis-ville United Methodist Church.

To order memorial trees or send flowers to the family in memory of Margaret McCarty, please visit our flower store.