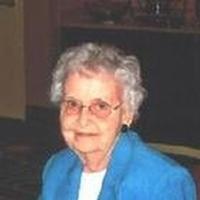 She was born March 25, 1922 at Keokuk, IA, the only daughter of Theodore and Jennie Aleveta Peterson.

She was preceded in death by her parents; her husband; and three brothers: Ralph,

Margaret graduated from Keokuk High School. Most of her life was spent as a farm wife and stay-at-home mom. She was active in the membership of the First Lutheran Church in Keokuk, and was proud of her Swedish heritage. She was active in extension, the Clark Co. American Cancer Society Board, and worked with the Survivors for Relay for Life. She loved

to sew and quilt, play cards and was an avid Cubs fan. She was known to make the best cookies in Clark County according to family and friends. More than anything, she loved spoiling her grandchildren.

Funeral services were held Saturday, March 19, 2011, at 1:30 p.m. at the First Lutheran Church in Keokuk, IA with Pastor Rodney Underwood officiating. Burial was in the Frazee Cemetery, rural Alexandria, MO.

Memorials are suggested to the First Lutheran Church, Keokuk, IA or the American Cancer Society.

To order memorial trees or send flowers to the family in memory of Margaret Cohagan, please visit our flower store.