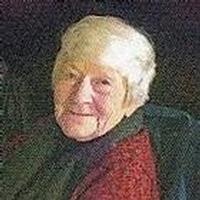 Louise was born February 11, 1923 at Williamstown, MO, a daughter of Edgar and Nannie Nichols Oard.

She and Charles Wallingford were married on December 21, 1941, in Louisiana, MO, by a former Anson Community Church pastor.

She was preceded in death by her parents; her husband; a daughter, Janet Elliott; a son, Dean Wallingford; two grandsons, Adrian Wallingford and Kevin Elliott and his wifeTasha, and children, Wyatt and Madison; two brothers, John and Robert Oard and a sister, Mildred Burkett.

Louise graduated from Williamstown High School and received her teaching certificate from Kirksville Teacher's College.
She taught at the Fair View school in the Anson community until the birth of her first child. She was a member of the Providence Baptist Church and of the Anson Community Church and Anson Ladies Aid. She was proud to have served on the Election Board for many years.

Most of Louise's life was spent as a farm wife and homemaker. She was a wonderful cook, enjoyed gardening, knitting, crocheting, and devoting her time to her family's needs. She was an avid bowler and enjoyed playing on leagues with her friends. Her greatest joy was spending time with and caring for her grandchildren.

Funeral services were held Saturday, November 16, 2013, at 1:30 p.m. at Wilson Funeral Home in Kahoka with Pastor Larry Wallingford officiating. Burial was in the Anson Cemetery.


Memorials were suggested to the Anson Cemetery Association or the Great River Hospice House.

To send a flower arrangement to the family of Louise Wallingford , please click here to visit our Sympathy Store.

To order memorial trees or send flowers to the family in memory of Louise Wallingford, please visit our flower store.