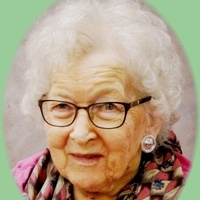 Lola Joan Gares entered heaven the same day the Lord brought her to this earth 87 years ago. She passed away with her children and grandchildren by her side on her birthday February 21, 2018 arriving to heaven in time to celebrate Billy Graham’s homecoming.

Lola Joan Murphy, daughter of Wayne and Marie (Fish) Murphy, was born on February 21, 1931 in Kahoka, MO. She grew up in Kahoka and later moved to La Grange where she accepted the Lord Jesus Christ as her Savior in her adolescent years. In 8th grade she returned to Kahoka to live with her grandfather, Aaron Fish, and help him on the farm and in the house as his wife had passed away. She cherished this time and found such great joy in helping her grandfather. During this time she attended Star Country School and graduated from Kahoka High School in 1948. Many stories have been heard about attending the country school and carrying a soup bean sandwich with mustard as one of her lunch bucket specials. Her children were so surprised to learn that she, along with her friends, Laneta (Blum) Gares, LaQuita (Arnold) Joy, Joy (Stewart) Hayes, and Eunice (Denham) Buford hitchhiked to La Grange during their senior year of high school. They had bus money but did not want to wait for the Wayland bus and thought hitch-hiking was a better option. On August 8, 1949, Lola was united in marriage to Clifford Gares in Kahoka, MO. After living in La Grange, moving to the Hunziker farm by Antioch, and the Dinger Farm on route Y, they purchased their current farm in 1959. All four children grew up on this farm. During early married life, Lola worked at the rubber plant in Keokuk, IA, Terrills’s Grocery, Benner’s Grocery, and the Kahoka Locker Plant. Lola loved going to the grocery store and her supply of food at home was always prepared for the winter. She never let any food that God had given her go to waste and always found a way to use all her scraps, even if it meant a gourmet meal for the cats. Years of helping Clifford raise cattle to sell for beef and her tenure at the Kahoka Locker Plant, led Lola to having an immeasurable amount of knowledge of meat and their different cuts. Lola also loved working outside in the garden, and so many people benefited in some way from her produce—especially her large strawberry patch. The summer that Lola started paying the kids a dime for each box picked instead of a nickel was never forgotten! A family of six planting and digging potatoes was a sight to behold. The only thing Lola did not want to see in the garden was a snake. She could pick up a mouse by the tail as it was an everyday occurrence, but a snake would make her hoe move mighty quickly. Lola was devoted to the Body of Christ and served as a Sunday school teacher to the 5-year olds for over 30 years at the First Baptist Church of Kahoka. Lola would frequently tell her children and grandchildren as she was told by her father-in-law when she married –"it is not how much you make but how you spend it." Lola would write down every penny she and Clifford spent even if it was for a candy bar. Her meticulous skills with a ledger sheet and adding machine were astounding throughout her life. She wanted to be faithful with every penny the Lord had given her. The Lord gave Lola a love for people. She always wanted to know how others were doing. She loved serving her family and would rarely take a seat during holiday gatherings as she was busy meeting everyone’s needs. She was also blessed with a quick wit, and in her last year and half at the nursing home, the staff had grown to love her. Even in her final days, she had her family and the hospital nurses smiling. She was married to Clifford for 69 precious years. She loved being his helpmate, and it was never work to prepare his meals and keep up the home. She loved serving alongside him. Their love endured and is a sweet testament to their children and grandchildren. Survivors include her husband, Clifford, of Kahoka; four children: Julie (Bud) Kattelmann of Kahoka, Judith (Ben) Roddy of Sioux Center, IA, Rodney (Mary) Gares of Kahoka, and Roger Gares of Colorado Springs, CO; five grandchildren: Jared Gares (Brittany Wensel) of Woodbine, IA, Jessica (Chad) Klay of Monterey, CA, Kyle Gares of St. Louis, Jenilee Roddy of Kahoka, and Julie (Joe) Thrower of Hannibal; nine great grandchildren: Jaelyn Gares, Kylene Thrower, Kash Gares, Macey Thrower, Mariah Klay, Kole Gares, Jack Thrower, Kali Gares, and Theo Klay sisters-in-law and brothers-in-law: Alene Murphy of Sedalia, Lola I. Gares of Kahoka, Laneta Gares of Monroe City, and Harold and Celesta Gares of Kahoka; as well as nieces, nephews, and other relatives. She was preceded in death by her parents; her in-laws, George and Julie Gares; a sister, Hazel (Eddie) Wofmeyer; three brothers, Robert (Jenny) Murphy, Delbert Murphy and Eugene Murphy; sister-in-law, Velda Zollars; brother-in-law Hilbert Gares; and nephews: Dennis, David, Mark and Harlan Gares and Glen Murphy.

Funeral services were Saturday, February 24, 2018 at 10:30 a.m. at the First Baptist Church in Kahoka with Rev. Joe Thrower officiating. Burial in the Kahoka Cemetery.

Online condolences may be expressed at www.wilsonfuneralservice.com.

To send a flower arrangement to the family of Lola J. Gares , please click here to visit our Sympathy Store.

Friends may call at Wilson Funeral Home after noon on Friday with family receiving friends from 5-7 p.m.

Friends may call at Wilson Funeral Home after noon on Friday with family receiving friends from 5-7 p.m.

To order memorial trees or send flowers to the family in memory of Lola Gares, please visit our flower store.