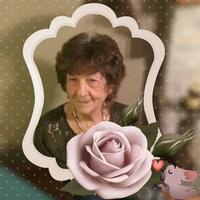 My mom’s obituary doesn’t touch on the many things she did. She and dad would clean out our clothes and toys (to our dismay sometimes) and leave boxes on doorsteps for family that needed them more than we did even though we didn’t have a lot growing up. We had a lot of love, a lot of fellowship and a lot of music. Although mom didn’t sing much, she encouraged each of us to sing, play the piano and to use that talent. It has been passed down several generations I am proud to say. We sang with her and played dad’s cds the last days of her life and sometimes she would join in. It was precious for us and that’s what we will remember, how she died in dignity and in peace, making it easier for all of us.

If one song would come to mind it would be "Wind Beneath My Wings". My mom was the person who was always in the shadows. She loved our dad so much and when he was getting all the praise she was in the shadows making all the "Elvis" scarves he threw in the crowd during his performances. She would do whatever she did without expecting any acclaim and with a sweet spirit. She truly was our hero.

I speak for my brother and sisters and the rest of our family when I say simply "thank you". For everything. Food, calls, visits, etc. The Clark Co. Nursing Home during her brief stay there, Blessing Hospital and the employees there who would sometimes visit her "party room" during their breaks, Dr. Beckert, Dr. E and Dr. Ghanekar and their staffs who she respected and trusted for many years, the Clark Co. Ambulance and Rescue Squad who took her on many rides and helped take her fears away. I could go on and on, but you all know who you are. I’m ending with a scripture that came to mind as I was writing this. Matthew 25:40 "Truly I tell you, whatever you did for one of the least of the brothers of mine, you did for me."

Lola Frances Eder, age 87, of Wayland, MO, passed away peacefully Tuesday, June 13, 2017, while a patient at Blessing Hospital in Quincy.

Lola was born November 19, 1929 at her parent’s home just south of Kahoka, a daughter of Ralph L. and Edna Opal Ingram McNally. Her mother died when she was a young girl and her dad married Myra Egley, who was a wonderful grandmother who her grandchildren adored.

She was preceded in death by her husband; her parents: Ralph McNally, Opal McNally and Myra Egley McNally; one brother, James H. McNally; and two sisters, Wilma McNally and Waneta Smith.

Lola worked at Wiggins Drug Store in Wayland while in high school and later at St. Joseph Hospital in Keokuk. She stayed home to raise her children and later went to work in the kitchen at Running Fox Elementary. She and Bud owned and operated a firework stand and the Dairi Kone just south of Wayland for many years. She was a faithful member of the Wayland United Methodist Church, Methodist Women, and Wesleyan Fellowship. She quilted every Wednesday at her church to raise money for needs of the church. Some of her memberships included the Clark Co. Food Pantry, Friendly Neighbors extension club, Friends of the Senior Center, and the Royal Neighbors of America. In 2009, she was selected the Fraternalist of the Year of Royal Neighbors for the entire nation. Her club in Wayland will be remembered for making apple butter to sell to raise funds for the Clark Co. R-1 Band and for other needs in the county. She and Bud were blessed to be able to travel throughout the United States, to Europe and on several band trips including New York and Pasadena. She also traveled to Hawaii with the band in 2009 with Becky Buschling, her friend of many years.

Following Bud’s death, Lola began volunteering at the Running Fox Elementary school four days a week, helping with children, purchasing school supplies, teacher’s workroom supplies as well as clothing and whatever was needed for students. Through the past ten years, at Running Fox she unselfishly gave of her time and money and in reward was called "Grandma Eder" by her school family and the many kids that passed through the doors. She loved each one individually and shared their joys, their happiness and their tears.

Together, she and Bud taught the importance of sharing, giving back, and unselfish love.

Friends called at Wilson Funeral Home in Kahoka after 9 a.m. Thursday with family receiving friends from 6-8.

Memorials in lieu of flowers are suggested to Running Fox PTO or the Clark Co. Food Pantry.

To order memorial trees or send flowers to the family in memory of Lola Eder, please visit our flower store.