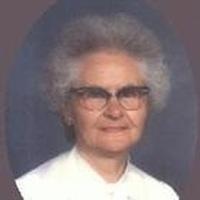 She was born February 22, 1911, at Medill, MO, a daughter of Anthony and Ada Smith Bergman.

On March 6, 1929, she was united in marriage to Emmett R. Boltz in Clark County.

She was preceded in death by her parents; her husband; two brothers, Lawrence Bergman and Cliff Bergman; two sisters, Nelly Brooks and Loretta Wright; and two in infancy.

Lola was a farm wife all of her life. She worked hard working in her garden and and raising her children. She was an accomplished quilter, an excellent cook and had taught cooking in 4H in earlier years. For many years she wallpapered homes and businesses in the area and in later years quilted and volunteered numerous hours at the Clark Co. Nutrition Site.

She was a faithful member of the Kahoka Christian Church. Lola loved her church and family, and was content whatever her circumstance.

Funeral services will be held Saturday, May 29, 2010 at 2 p.m. at Wilson Funeral Home in Kahoka with burial following in the Kahoka Cemetery. Officiating will be Rev. Jim Campbell.

Friends may call after 9 a.m. Saturday at Wilson Funeral Home with family receiving friends from 1:00 p.m. until time of services.

Memorials are suggested to the Kahoka Christian Church or the Clark Co. Nutrition Site.

To order memorial trees or send flowers to the family in memory of Lola Boltz, please visit our flower store.