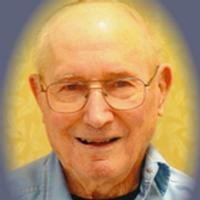 He was preceded in death by his parents; his wife; a granddaughter, Lori Frazier Gregory; and three brothers: Albert, Tommy, and Raymond Frazier.

Leroy was bound to the land and committed to raising his family on a farm. He was a hired hand for several farms, worked several other jobs, including Foote Mineral in Keokuk,until he was able to save up enough money to purchase the equipment he would need. From 1950 until the time he entered the Clark Co. Nursing Home, he was farming and caring for the livestock he owned and raised as well as for others.

In the meantime, Leroy was a loyal Democrat and former committee member together with his wife, Evelyn. He was a former board member of the Clark Co. Ambulance District, a member of St. Francisville Lodge # 588, A.F.& A.M. at Wayland, and of American Legion Post # 1000 at Jefferson City. He had participated in the Honor Flight in August of 2014.

Leroy loved to get out and work ground, bulldoze, and check on the crops. His family was his greatest accomplishment.

Friends called at Wilson Funeral Home after 9 a.m. on Wednesday with family receiving friends from 6-8 p.m. followed by a public Masonic Service being conducted at 8.

Memorials are suggested to the Combs Cemetery, St. Francisville Lodge # 588, A.F. & A.M. or the donor's choice.

St. Francisville Chapter # 588, Wayland, will conduct a public Masonic Service following the visitation on Wednesday at 8 p.m. All are welcome to attend.

St. Francisville Chapter # 588, Wayland, will conduct a public Masonic Service following the visitation on Wednesday at 8 p.m. All are welcome to attend.

To order memorial trees or send flowers to the family in memory of Leroy Frazier, please visit our flower store.