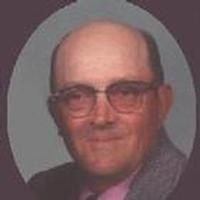 He was born September 1, 1918 at his parents' home in Clark County, near Liberty Church, a son of Emmet V. and Leona Florence Howard Robertson.

He attended Sunday School and Church at Liberty Baptist and accepted Jesus as his Savior at the age of fifteen during a Revival. He attended school at Fairmont for eleven years, graduating from Wyaconda High School.

In 1942, Leland was drafted into the service and spent 39 months, with 17 months in combat in the European theater. Following the war, he visited Austria, Switzerland, Italy, Paris, and London.

He started farming in 1948 in Knox County, near Rutledge, with his brother, Clarence, who had also been in the service. They attended Veterans School together for five years at Edina.

While visiting with his mother at Graham Hospital in Keokuk, he was introduced to a nurse, Mervin Ingold, and he knew then that she was the one he had been dreaming about. She was also a graduate of Wyaconda High School, but they had never met before as she graduated before Leland. They were married March 21, 1953 and moved to a farm east of Wyaconda in 1959 and became active in the Baptist church there, both holding various teaching jobs, singing in the choir, and Leland being ordained as a Deacon in 1964 and serving for 30 years.

They sold their farm in November of 1994 and moved to the Kahoka Senior Housing and also their membership to First Baptist Church in Kahoka.

Mervin's health was failing fast and she went to be with the Lord on March 4, 1999.

Survivors include a sister, Imogene Kurtz of St. Louis, MO and sister-in-law, Imo Robertson of Laramie, WY; also, many cousins, nephews and nieces.

He was preceded in death by his wife; his parents; three brothers: Clarence, Floyd and Wilbur and a sister, Nola Anderson.

Leland was a member of the American Angus Association and had raised both registered and purebred cattle. He enjoyed hunting and fishing, was an avid sports fan, and had played baseball prior to entering in the service and after being discharged. He also liked having a large garden and growing many flowers.

He will be remembered as a kind and gentle man who loved his family and his farm with the black cows, the beautiful flower gardens, and the pond edged with cat-tails sheltering the red-winged blackbirds.

Memorials were suggested to the Clark Co. Senior Center or the Wyaconda Cemetery.

To order memorial trees or send flowers to the family in memory of Leland Robertson, please visit our flower store.