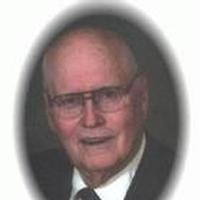 Leland was the third child born to Roy Melvin Hobson and Minnie Gertrude Chaves Hobson. He was born at home on September 30, 1921, in Kahoka, MO, where he grew up and worked on the family farm. He attended a rural one room school at Lincoln College and Little Fox School north of Kahoka, and graduated from Kahoka High School in 1939. He then traveled to the state of Washington to work in a bottling plant until 1940, when he returned home to Kahoka to marry his high school sweetheart. On December 31, 1940, he and Lavola Pearl Hodges were married in Palmyra, MO.

Leland farmed in the Kahoka area from 1941 to 1969. From 1951 until 1963 he owned and operated the North End DX gas station in Kahoka and two automobile salvage businesses, one in Brookfield, Missouri and one in Kahoka. In 1967 and 1968, he was a foreman at the Iowa Army Ammunition plant in Middletown, IA. In 1968, he began a farm equipment business south of Kahoka and continued that business for 17 years until 1985. Later, he and his son Jeffrey operated Surplus Unlimited in Kahoka. He had been a resident of the River Hills Village in Keokuk, IA, since October, 2007.

He leaves behind his wife, Lavola Hobson, of Kahoka; two daughters, Judy Lorimor of Marengo, IA, and Janis Kelsick and her husband, John, of Hillsboro, IA; and one son, Jeffrey Hobson and his wife, Sheila, of Keokuk, IA. Seven grandchildren survive: Jalene Megchelsen and her husband, Tom, of Marengo, IA; Janese Ceron Ott and her husband, Miguel, of Merida, Mexico; Jelissa Stewart and her husband, Matt, of Wapello, IA; Jason Kelsick and his wife, Stephanie, of Alleman, IA; and, Breelyn, Brayden and Bryna Hobson of Keokuk, IA. Twelve great-grandchildren also survive: Thad, Jalise, and Jestine Megchelsen of Marengo, IA; Mikey, Gabe, and Danika Ceron Ott of Merida, Mexico; Jacob, Hannah, James and Joseph Stewart of Wapello, IA; and, Aidan and Evan Kelsick of Alleman, IA. He is also survived by a brother-in-law, Devon Hodges and his wife, Lois, of Lima, OH; also, a nephew and niece and their families: Tommy Hobson of Lewiston, ID, and Joyce Bankson of New Sharon, IA.

He was preceded in death by his parents, a sister, Opal Buschling of Canton, MO, two brothers, Leroy Hobson of Kahoka, MO, and H. C. (Hobby) Hobson of Lewiston, ID.

Funeral services were held Wednesday, February 25, 2009, at 11 a.m. at the First Baptist Church in Kahoka with the Rev. Eugene Spurgeon and Rev. Matt Hoffman officiating.

Memorials were suggested to the First Baptist Church of Kahoka or the National Parkinson Foundation.

To order memorial trees or send flowers to the family in memory of Leland Hobson, please visit our flower store.