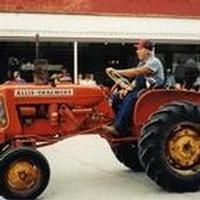 
He was born on March 31, 1945 in Winchester, Missouri to Harold and Wilhelmine (Willie) Bick Holmes. He married Nancie McBride Bevans in Kahoka, Missouri on February 15, 1986, at the Kahoka Christian Church.

He was a member of the Clark County/Kahoka Fire Department for over forty years until ill health made him give it up. He served in the Army Reserves for six years as a heavy equipment operator.

Larry helped his dad blade snow for the Clark County schools and other Kahoka businesses, churches, and private residents from 1958 to 2000. Over the years he worked for the Army Ammunition Plant, Wiss and Wiss Implement, Trump Farms, Redding Seed and Supply, Ramsey's Sawmill and Trump Trucks. He was a life time farmer in Clark County doing custom combining and hay-baling for various farmers. From a young age he helped his dad do Allis Chalmers tractor repair in their shop. At the age of twelve, his dad had him take apart an Allis Chalmers WD tractor. Once he had it apart, his dad told him to put it back together. He did. And it ran!

He loved working on antique tractors and classic cars, helping to preserve the past for future generations to enjoy. His knowledge of antique tractors and classic cars was extensive and the information he was able to share with others will be missed.
He was a founding member of the Clark County 2-Cylinder Club, the Missouri Chapter of the International Harvester Club, the Minneapolis and Moline Corresponder Club, receiving the Volunteer of Year Award in 2010 from the Allis Connection Club, and the Missouri Allis Chalmers Chapter. He served on the board of directors at the Western Illinois Threshers for many years, and the Mount Pleasant Old Threshers, receiving the volunteer of the year award in 2012. Larry was involved in drag racing in Kahoka in the 1960's and he won the first Demolition Derby at the Clark County Fair.

He was proud of his children and grandchildren and loved them very much. He also enjoyed spending time and reminiscing with his antique tractor friends.

Inurnment was in the Kahoka Cemetery.

To send a flower arrangement to the family of Larry E. Holmes , please click here to visit our Sympathy Store.

To order memorial trees or send flowers to the family in memory of Larry Holmes, please visit our flower store.