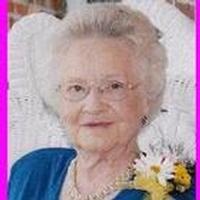 Kitty Bess Hall Wiss, age 95, passed away in Altamonte Springs, Florida, on January 2, 2012. Kitty Bess was born at home to Baxter H. and Mrytle Lou Adams Hall on November 16, 1916 in Clarence, Missouri. She was a teacher at Martin Rural School in Shelby County, Missouri, from 1934-1937 and attended Culver Stockton College during the summers. Mrs. Wiss worked at Kirksville, Missouri, ASCS for one year. In 1938 she moved to Kahoka, Missouri, where she was a Civil Service employee with the Farm Security Administration.

Kitty Bess married Joseph A. Wiss on April 13, 1941. During World War II, Kitty Bess and Joe moved to New Orleans where Joe was stationed in the Navy. Kitty Bess worked for the Weather Bureau and the Navy Department until 1945. They had two daughters, Kitty Jo Gates and Rebecca Louise Nickol, both of Orlando, Florida. Kitty Bess and Joe celebrated their 50th wedding anniversary in 1991.

Kitty Bess moved to Maitland, Florida in 2002 to be near her daughters. However, she never forgot her loyal and loving friends in Kahoka. Her greatest joy was making her annual pilgrimage back to Kahoka to see dear friends, eat some Missouri corn, and soak up the Midwestern goodness that was so important to her. She had a wonderful life in sunny Florida, but Kahoka was the real home of her heart.

A Mass of Christian Burial will be held Tuesday, January 10, 2012 at 10:30 a.m. at St. Michael's Catholic Church in Kahoka, MO, with burial following in the Kahoka Cemetery.

Friends may call at Wilson Funeral Home after noon on Monday, January 9, 2012, with family receiving friends from 6-8 p.m. and a Prayer Service being held at 7 p.m. Monday.

Memorials are suggested to the Clark Co. Food Pantry or the H. E. Sever Memorial Library.

To order memorial trees or send flowers to the family in memory of Kitty Wiss, please visit our flower store.