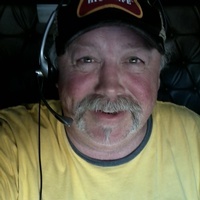 Kevin L. Palmer, age 60, of Kahoka, MO, died unexpectedly on Monday, December 31, 2018 in Green River, Wyoming while on his job as an over the road trucker.

Kevin was born August 5, 1958 in Kirksville, MO, a son of Gene and Joan Anthony Palmer.

He was preceded in death by his father; his grandparents, Murl and Helen Palmer, and an aunt, Juanita Palmer.

Kevin graduated from Clark Co. R-1 High School in 1976. He was employed as an over the road truck driver by Tugboat Transportation of Bonaparte, IA. He was proud of an award he received two years ago for having driven over five million miles without an accident.

Kevin loved driving a truck but when not working his happiest place was the outdoors. He loved being outside and especially loved fishing. He enjoyed riding his motorcycle and would often just get on it to try out a new place to eat or visit a friend. He was very social and once you met him you were his friend.

Kevin was a good cook and loved to barbecue and cook for everyone. He enjoyed hanging out at the restaurant drinking coffee and spending time with his friends at what Cookie’s employees refer to as "Kevin’s Table". He was a baby and animal "magnet". They were naturally drawn to him and he could comfort and put babies to sleep as easily as if he was their mother. He cherished his family and was proud of each one of them and time spent with them was what he enjoyed most. Those he loves most will miss hearing their special nick name he gave them.

Private graveside services for Kevin were held Tuesday, January 8, 2019 in the Kahoka Cemetery.

Memorials are suggested to the family or the American Heart Association.

To send a flower arrangement to the family of Kevin L. Palmer , please click here to visit our Sympathy Store.

To order memorial trees or send flowers to the family in memory of Kevin Palmer, please visit our flower store.