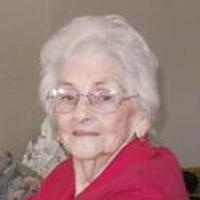 She was born June 14, 1920 at the family home in the Bethlehem neighborhood of Clark County, the daughter of James S. and Letta M. Blanton Jinkens.

She was preceded in death by her parents; her husbands; and siblings: Orris Jinkens, Zora Overhulser, Pauline Meyer, and James, Robert, Kirk, and Shirley Jinkens.

She was a member of Bethlehem Baptist Church and later became a member of St. Paul United Church of Christ in Kahoka where she raised her children.

She had worked several jobs, but the majority of her life was spent as a housewife, caring for her family. She believed in working hard and being fair and kind to everyone she met. She could sew anything and spent hours making clothes for her family and lovingly quilting for each one as well. In addition, she enjoyed gardening and caring for her flowers. Her greatest wish was to keep her family healthy and happy.

Memorial services were held Tuesday, February 3, 2015 at 10 a.m. at St. Paul United Church of Christ in Kahoka with Rev. Dixie Laube officiating. Inurnment will be at a later date in the Kahoka Cemetery.

Memorials are suggested to the Bethlehem Cemetery or St. Paul United Church of Christ.

To send a flower arrangement to the family of Kerdonna L. Jinkens Sisson Sabatino , please click here to visit our Sympathy Store.

To order memorial trees or send flowers to the family in memory of Kerdonna Sabatino, please visit our flower store.