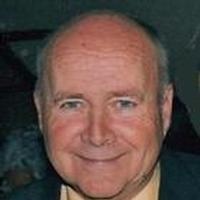 peacefully on Thursday, April 17, 2014 at his home surrounded by his family.

On December 19, 1964, he was united in marriage to Marilyn J. Bastert at the Union Methodist Church in Quincy. They would have celebrated 50 years of marriage this coming December. They were blessed in this union with two children that they cherished deeply.

Survivors include his beloved wife, Marilyn, of Quincy; a daughter, Krista Gray of Quincy; daughter-in-law, Linda Martin-Volner and her husband, Rick, of Jefferson City, MO; seven grandchildren: Jessica Martin and Ryan (Amber) Martin all of Nashville, TN, Brandon Martin of Cape Girardeau, MO, Tyler and Karissa Martin of Jefferson City, MO and Erika and Chance Gray of Quincy; a sister, Joyce (Mrs. Ron) Ferguson of Springfield, MO; brothers-in-law and sisters-in-law: Robert and Dee Bastert of Coatsburg, IL and Dorothy and Harold Zopf of Quincy; as well as nieces, nephews and other relatives.

He was preceded in death by his precious son, Kevin, and his parents.

Kent was a member of "The Crossing" in Quincy and a former member of St. Paul United Church of Christ in Kahoka. Former memberships included the Kiwanis, Clark Co. Fair Board St. Paul Church Consistory, and Clark Co. School Board. He was a current member of the Quincy Elks Lodge and Missouri Realtors.

Kent and Marilyn sold General Electric appliances and Buick and GMC vehicles until 1974 when they opened Ken-Mar Realty in Kahoka which was an icon in Kahoka for many years until closing its doors in December of 2013 due to his failing health. Kent was a well-respected real estate appraiser for several years. At the height of the building industry, Kent became the owner of Big Tree Transplanting, providing beautiful landscaping to homes, many in the St. Louis area. He sold this business in 2012. Kent was currently a licensed agent/broker for McAfee Real Estate, L.L.C. and a State Certified Appraiser.

Kent loved people. He had friends from all walks of life and cherished each and every one of them. Marilyn was the "love of his life" and he cherished her with everything he had. He was a devoted father and grandfather and loved when he could attend their functions. He had found a wonderful "family" in his fellowship with "The Crossing" in Quincy.

Funeral services will be held Saturday, April 19, 2014, at 10 a.m. at "The Crossing", 48th and Maine Street in Quincy, IL. Officiating will be Pastor Brian Byquist with eulogist, Mr. Ronald Ferguson.

Burial will follow in the Greenmount Cemetery in Quincy.

Friends may call at Wilson Funeral Home in Kahoka after 9 a.m. Friday with family receiving friends there from 6-8 p.m. Family will again receive friends on Saturday from 9 a.m. until time of services at "The Crossing".

Memorials in lieu of flowers are suggested to the Clark Co. Local Cancer Fund or the Quincy High School Music Department.

On-line condolences may be made to www.wilsonfuneralservice.com.

To send a flower arrangement to the family of Kent R. Martin , please click here to visit our Sympathy Store.

To order memorial trees or send flowers to the family in memory of Kent Martin, please visit our flower store.