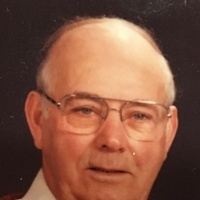 KENNETH M. COLYER
Kenneth Marshall Colyer died June 27, 2018. He was 98 years old, born Dec 15, 1919 at home. What a life of change he saw. His parents were farmers, mostly living in NE MO, around Brashear. Ken helped his father build roads in Adair Co using teams of horses. The family lived in OK during the Great Depression/ the Dust Bowl. He would have quit school after 8th grade if his superintendent hadn’t made a home visit encouraging high school. He played basketball in balconies, outdoor courts, gyms without seating where walls were the out of bounds. After Pearl Harbor he joined the Air Force, served in the European Theater - England Scotland, North Africa, Italy, loading munitions on planes.

After the war he married Norma Erwin, March 30, 1946 His father pulled the Model A out of a mud hole with his team of horses so he could make it to the ceremony. Ken went to barber school, had 2 children - Carol (Roger) Nimmo and Judge Bruce (Sally) Colyer. The family lived in Bloomfield,Iowa, making friends and good memories from 1946-1994. Ken also worked construction, sold cars and was maintenance director at the hospital He bowled, played golf (proud of his numerous holes-in-one), helped with local sports, watched the Cardinals and Iowa Hawkeyes. He first listened to the Cardinals when they were the Browns on radio, saw them play at Sportsman's Park with $15 for the weekend. He came home with change.

With retirement came the move to Florida, a golfing community at Lake Placid. Six years ago the Colyer’s moved to Kahoka,MO to be closer to family

There will be no public services. At 98 and in poor health, Mr. Colyer has outlived most of his friends. But he had precious memories of a long life, people he loved and cared for - his wife, his children and their families including 5 grandchildren and 12 great- grandchildren.

The family was served by Wilson Funeral Home in Kahoka.

To send a flower arrangement to the family of Kenneth M. Colyer , please click here to visit our Sympathy Store.

To order memorial trees or send flowers to the family in memory of Kenneth Colyer, please visit our flower store.