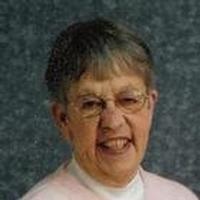 Colleen was born March 17, 1934 at Wyaconda, MO, a daughter of Ola and Margaret Peggy Smith Wright.

She was preceded in death by her parents; her husband; grandson, Robert Thornton; brothers, Forrest Bud Wright and Phillip Mike Wright and sister, Marjorie Joy.

Colleen graduated from Revere High School in 1953. She was an active and long-time member of the First Baptist Church Church in Wayland and following their move to Palmyra, she and Bob had enjoyed membership and fellowship in Mission Hill Baptist Church. Colleen retired from the Clark Co. Nursing Home in Kahoka and volunteered several years at Mission Hill Academy in Palmyra. For several years she participated in the Relay for Life walk. She was devoted to her church and her grandchildren.

Visitation was held at Wilson Funeral Home in Kahoka after 5 p.m. Wednesday with family receiving friends from 6-8 p.m. Memorials were requested to the Clark Co. Nursing Home Relay for Life team.

To order memorial trees or send flowers to the family in memory of Katherine Gorham, please visit our flower store.