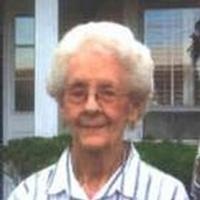 She was born January 26, 1924, a daughter of Enelime and Eleanor Smelser Zern.

Julia was born and raised in the Dallas City area, graduating from high school and then going to work for Sheaffer Pen in Fort Madison. It was during that time that she met and married Eugene E. Danner on October 1, 1950 in Fort Madison.

They moved to Texas for a brief time and then moved to Kahoka in the early 1950's.

She was preceded in death by her parents; her husband, Eugene, on January 29, 1996; and two sisters, Katherine Foglesong and Jean Duffy.

Most of Julia's life was spent as a housewife caring for her home and family. After she raised her children she worked a number of years at the local Pamida store. She was a member of the Kahoka Christian Church and Kahoka Chapter # 40, O.E.S. Julia was a talented seamstress who loved to sew and teach her grandchildren how to sew. She was a devoted mother and grandmother who cherished time spent with them. She also cherished her special friends and their times spent together.

Funeral services were held Friday, March 11, 2011 at 10:30 a.m. at Wilson Funeral Home in Kahoka with Rev. Jim Campbell officiating. Burial was in the Kahoka Cemetery.

To order memorial trees or send flowers to the family in memory of Julia Danner, please visit our flower store.