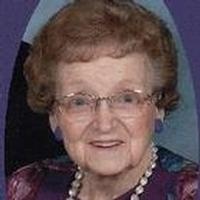 She was united in marriage to Chiswell D. Chis Lentz on October 18, 1944 in Spokane, WA. She and Chis met while he was stationed in the U. S. Army during World War II in Arkansas. They later became the proud parents of two sons who provided them with two wonderful daughters-in-law and five beautiful grandchildren. Chis preceded her in death on May 7, 2008.

She was preceded in death by her parents; her husband; one brother, Earl Holmes; and two sisters, Pauline Payne and Mary Seaton.

Joy graduated from Perryville (Arkansas) High School in 1937 and received a business certificate following two years of education in Little Rock, AR. She worked for several different railroads including Missouri and Northern Arkansas (MNA), Rock Island and Great Northern for five years until her marriage.

Joy was a long-time resident of Kahoka and she and Chis were active in many local organizations and activities and many times she did the bookkeeping and other clerical activities associated with those activities and with Chis job. They were active in the Lions Club from the time it was chartered until his death. Joy was a member of the former K-Ettes Extension Club, and former Cub Scout Den Leader and 4-H Advisor. She was a dedicated volunteer and board member of the Clark Co. Chapter of the American Cancer Society.

She was a member of the Kahoka United Methodist Church and had enjoyed singing in the choir as long as she was able. She was very active in the United Methodist Women group. Joy loved music, traveling and spending time with her family and many friends.

Funeral services were held Tuesday, September 18, 2012 at 10:30 a.m. at the Kahoka United Methodist Church with Pastor Barb Hagerla officiating. Burial was in the Kahoka Cemetery.

Memorials are suggested to the Kahoka United Methodist Church.

To order memorial trees or send flowers to the family in memory of Joy Lentz, please visit our flower store.