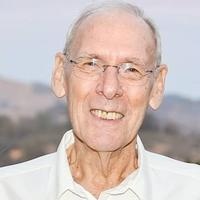 January 20, 2017 in Mercy Hospital in Springfield, MO following a battle with Leukemia.

Born the youngest of four siblings to Merryl L. and Mary Eagon McCoy, John made his entry on March 11, 1936 in Fox City (Clark County) Missouri.

He married his high school sweetheart, Marvene Ruth Muhrer on May 6, 1956, at St. Paul United Church of Christ in Kahoka and on September 3, 1958, they were blessed with a beautiful baby girl, Tamila Jo.

John graduated from Kahoka High School and joined the U. S. Naval Reserves in 1954. He received his honorable discharge in 1962. John began his career at Moore’s Business Forms in Kahoka and moved to Oregon where he worked a period of time, returning to Kahoka and working for Home Gas Company. He received schooling in computer programming and operation and moved to Springfield, MO where he worked as a computer operator. He retired in 2000 following 25 years with Ranger Insurance Company where he was safety manager for several mid-west states and trained 180,000 firemen throughout the United States on how to combat a propane fire. Following his retirement, John continued to work part time as a safety engineer and loss control auditor.

He is survived by his wife, Marvene, of Lebanon; a daughter, Tamila, of Rosamond, CA; two granddaughters, Nataly Beck of Livermore, CA and Nycole Falgoust of San Antonio, TX; two great-grandchildren, Nicolas and Dakota of San Antonio, TX; two sisters, Twila Peters of Kahoka and Virginia Kullman of Steamboat Springs, CO; brother-in-law, Dr. K. E Kirchner of Kahoka; sister-in-law, Betty McCoy of Kahoka; as well as nieces and nephews and other relatives.

John was a loving husband, father, and grandfather. He also remained very close to his Clark County family and spent many hours on the road between Lebanon and Kahoka.

To order memorial trees or send flowers to the family in memory of John McCoy, please visit our flower store.