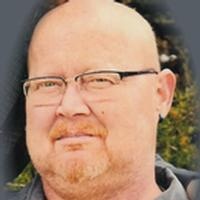 John R. Hammond - "Hammer," "Daddy", "Sweetie", ran his last mission on earth at 1601 hours, Wednesday, May 4, 2016 in Blessing Hospital in Quincy, IL. There is another guardian angel to watch over us all. It was good to be him!

On August 8, 1992, he was united in marriage to his "sweetie", Roby J. Priebe and thus began a partnership cherished by both which will last until the end of time.

He was preceded in death by his father; stillborn brother, Joey; and mother-in-law, Ruby Priebe.

John graduated from Clark County R-1 High School with the class of 1985 and received his Bachelor's Degree in Industrial Science in December of 1992 from Northeast Missouri State University in Kirksville, MO, and his Masters in Industrial Safety from Central Missouri State University in Warrensburg, MO. John stressed the importance of education and made himself knowledgeable about anything and everything that interested him.

John joined the U. S. Army immediately following graduation from High School and proudly served his country until his discharge in 1990. Following 9/11, John had a desire to return to the military and was injured in Iraq and medically retired from the service as a 2nd Lt. John was Convoy Commander responsible for securing convoys throughout Iraq during the most dangerous period of conflict, and he fulfilled his promise to bring his people home safely. John was always ready to reach out to those in need and selflessly gave his time, energy and resources to others.

After John received his Masters Degree, he returned to Clark County and worked for Morse Rubber in Keokuk as the Safety Engineer. He then was employed by Knapheide in Quincy as Safety and Human Resources Manager. It was during this time that he re-entered the service, was injured, and then was medically retired from Knapheide.

He never let his "disability" get him down. Instead, he chose to serve others in many ways. He joined the Clark Co. Moose Lodge, the Ayer-Boatman Post # 4342, V.F.W., Herman Blum Post # 192, American Legion, St. Francisville Lodge # 588, A. F. & A.M. and the NRA. He loved to cook and volunteered to do so at many benefits. He was also known for his catering. He loved everyone and had very few, if any, enemies.

John enjoyed traveling and camping with family and friends. A lifelong student of history, he excelled at Civil War reenactments, family historical research and Indian and military artifacts collection. His wife often joked that he should start a "hobby of the month" club. John became a Boy Scout in his teens and went on to assist with his sons' scouting interests as an adult leader. He was inducted in to the Lodge of the Silver Tomahawk at Camp Eastman.

The center of John's world was his home and family. He was always proud of his boys' character and accomplishments in all things great and small. His family became known as "Team Hammer" as they rallied together to battle his illness.

Friends called at Wilson Funeral Home after 10 a.m. Sunday with family receiving friends from noon until services at 2 p.m.

Memorials in lieu of flowers are suggested to the family for their childrens' education fund or to the Wounded Warrior Project.

Friends may call after 10 a.m. Sunday at Wilson Funeral Home.

Friends may call after 10 a.m. Sunday at Wilson Funeral Home.

To order memorial trees or send flowers to the family in memory of John Hammond, please visit our flower store.