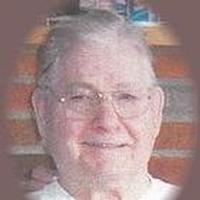 John was born April 14, 1925, in Alexandria, MO, a son of Alfred and Emma Bryant Eddleman.

He was preceded in death by his parents; his wife; a son-in-law, Marty Stewart; three brothers: Fred, Frank and Ray Eddleman; and three sisters: Esther Hess, Elizabeth Value, and Alice Jones.

John was a Disabled American Veteran and a member of Herman Blum Post # 192, American Legion at Kahoka. He was a long-time member of the First Baptist Church in Wayland.

He farmed all of his life and loved caring for his dogs and animals. He was an avid "antiquer" long before American Pickers became famous. He enjoyed looking for the perfect item to bring home with him.

Most of all, he loved spending time with his friends and family.

Funeral services were held Monday, February 17, 2014 at 10 a.m. at the First Baptist Church in Wayland with Rev. Dan Deatrick officiating. Burial with military honors was in the Frazee Cemetery.

Visitation was held at Wilson Funeral Home in Kahoka after noon on Sunday with family receiving friends from 6-8 p.m.

Memorials were suggested to the Wounded Warriors Project.

To send a flower arrangement to the family of John R. Eddleman , please click here to visit our Sympathy Store.

To order memorial trees or send flowers to the family in memory of John Eddleman, please visit our flower store.