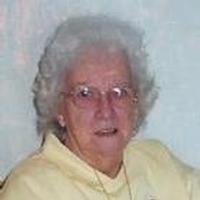 Jeanette was born February 10, 1927 in Kahoka, a daughter of Walter S. and Elizabeth Gram Alexander.

She was preceded in death by her parents; her husband; a daughter, Brenda Flynn; one brother, Walter S. "Sheron" Alexander and his wife, Myrna; sister-in-law, Pat Alexander; and brothers-in-law, Raymond D. and Robert S. Briscoe.

Jeanette graduated from Kahoka High School in 1945. She was a Sunday School teacher at the Colony Methodist Church and later attended the Williamstown United Methodist Church.
She was also a member of the Knox City American Legion Auxiliary. She and Dobbin owned a farm and raised their children in Lewis County. They moved to Williamstown in 1987 due to his failing health.

Jeanette was an excellent seamstress and a great cook. She had a giving and big heart for everyone, especially for children.

Graveside services will be held Saturday, September 21, 2013 at 10 a.m. at the LaBelle Cemetery, LaBelle, MO.

Friends may call after 9 a.m. Friday at Wilson Funeral Home in Kahoka with family receiving friends from 6-8 p.m.

Memorials are suggested to the LaBelle Cemetery.

To send a flower arrangement to the family of Jeanette E. Briscoe , please click here to visit our Sympathy Store.

To order memorial trees or send flowers to the family in memory of Jeanette Briscoe, please visit our flower store.