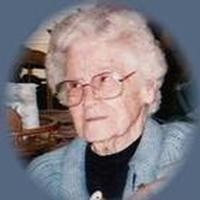 Jean Davis, age 106 of Kahoka, MO, died Thursday, December 11, 2014 at the Clark Co. Nursing Home in Kahoka where she had been a resident the past 14 months.

Jean was born June 17, 1908 in Arbela, MO, a daughter of Clyde and Oda A. Meryhew Davis. Although Jean never married, she helped raise her best friend, Virginia, whose family became her own.

She was preceded in death by her parents; her brother, Frank Davis and his wife, Juanita; her best friend, Virginia Roberts; and Virginia's son, Marty Roberts.

Jean spent the majority of her life in the Arbela area, graduating from Granger High School. She was appointed Post Mistress in Arbela in 1937 where she retired due to mandatory age requirements at the age of 70. She later made her home in Logan, IA until entering the Clark Co. Nursing Home.

Jean was a member of the Arbela Baptist Church. She loved to play the piano, crochet and knit. She was very intelligent and blessed with a wonderful memory. The Roberts family held a special place in her heart and being with them meant more to her than anything.

Friends called at Wilson Funeral Home after 9 a.m. Saturday with family receiving friends from 1 p.m. until time of services.

To send a flower arrangement to the family of Jean Davis , please click here to visit our Sympathy Store.

To order memorial trees or send flowers to the family in memory of Jean Davis, please visit our flower store.