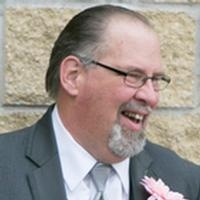 Jay Patrick Nixon, age 51 of Kahoka, Missouri, passed away peacefully on Tuesday, May 10, 2016 in the Great River Hospice House in West Burlington, IA, surrounded by his family following a lengthy battle with diabetes.

He was married to Julieanne Gandy in 1986 and they were the parents of Zach and Jenna.

Jay graduated from Clark Co. R-1 High School in 1982 and attended NEMO State in Kirksville where he was a member of Alpha Gamma Rho - Beta Iota Chapter. Other memberships included the Clark County Moose and Kirksville Country Club.

He was employed 30 years total by Domino's Pizza, first as a franchise owner in Kirksville and later as Director of Operations for five stores in the tri-state area. Jay was a "people person", he loved being around others, brought fun into everything he did, and thought it his personal duty to make people laugh, even on his last day on Earth. He absolutely loved playing black jack and looked forward to any chance he had to play cards with his buddies. He was famous in the area for singing karaoke, his favorite tune to sing being "New York, New York" by Frank Sinatra.

Jay was an avid Kansas City Chiefs and St. Louis Cardinals fan. He "lived" for NFL Sunday. In high school, Jay wore the # 79 football jersey and it was his joy to watch Zach play - wearing the very same number. His children's activities took precedence over any other.

Jay had many interests and music was one of them. He valued his friendship with Rhonda Vincent and her husband, and loved to hear her sing. He was the world's biggest fan of Ronnie Milsap, and once stayed in the hotel room with his band after a concert. Jay attended over 40 of Ronnie's concerts, including on January 22 of this year when his children took him to his last one. He was also a huge fan of REO Speedwagon, attending over 60 of their concerts in his lifetime as well.

Jay was a good cook and enjoyed calling his children to come over for supper he had prepared. In addition, he was a very patient man with his children, friends, and his constant trials with his health. He lovingly referred to his mother as "the warden", as she was always keeping him in line. He had a special love for his dog, Myrtle, who was a constant friend to him, even in his last days. He always said his greatest accomplishments in his life were his children, Zach and Jenna.

Memorials may be made to the Chambersburg Cemetery or Great River Hospice House.

Friends may call after 9 a.m. Friday with family receiving friends from 5-8 p.m.

Friends may call after 9 a.m. Friday with family receiving friends from 5-8 p.m.

To order memorial trees or send flowers to the family in memory of Jay Nixon, please visit our flower store.