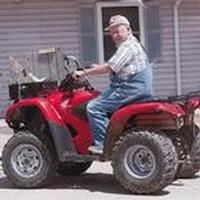 Earl was born May 8, 1926 in Callao, Missouri, the eldest son of Alex and Connie Bea Grimshaw Watson. He was always proud to share his birthdate with Missouri's only president, Harry S Truman.

Earl was raised in Callao and attended rural schools. At the age of 16, he traveled to Keokuk, Iowa seeking employment, and found it at Purity Oats. His employment there was cut short by the advent of WWII where he served in the Army. He received a Purple Heart for injuries sustained at Cebu Bay, Philippines. Earl was proud of his military service and was a member of Herman Blum Post # 192, American Legion.

After discharge from the Army, he returned to Missouri to marry Juanita Rose Moore of St. Patrick, Missouri on December 9, 1945. They were married 64 years and together raised six children. Juanita preceded him in death on February 21, 2010.

After a short farming career, Earl began work as a carpenter/bricklayer for Whiston Construction. His first job was building the Shrine of St. Patrick. He remained employed by Bryon until the early 1970's when he became self-employed.

His carpentry credentials heralded back to boyhood. At age seven he assisted his Grandfather Grimshaw in the razing, re-locating, and again erecting abandoned miners' homes from Bevier to Callao. In carpentry, he was a "natural" and was seldom stumped by developmental glitches. He seemed always able to find a solution using whatever might be at hand. From an earlyage, he put his faith in hard work and was true to that faith throughout his career.

In his retirement years, he was a well-known figure "tooling about" town on his 4-wheeler. He was a regular at the Clark County Nutrition Site, (for which he was most grateful), a competitive and enthusiastic euchre player, and always entertaining to those around him. Earl was an avid outdoorsman and naturalist throughout his life, along with being a dyed-in-the-wool Cardinal fan.

Earl will be greatly missed by his surviving family. These include Gloria (Charley) Allen, Gina Bash, Julie (Mark) Kirchner, and Roger (Coleen) Watson, all of Kahoka, Gary (Connie) Watson of Fulton, Steve (Nancy) Watson of Gladstone, a multitude of grandchildren, great-grandchildren; one great-great grandson; one brother, Connie (Violet) Watson of Callao, MO; and other relatives.

He was preceded in death by his wife, Juanita, his parents, a younger brother, Jackie Watson, and his long missed grandson, Adam Bash

To send a flower arrangement to the family of James "Earl" Watson , please click here to visit our Sympathy Store.

To order memorial trees or send flowers to the family in memory of James Watson, please visit our flower store.