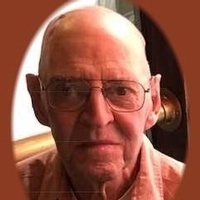 James B. Robertson, age 86, of Wyaconda, Mo, passed away peacefully on Wednesday, April 25, 2018 in the Scotland Co. Care Center in Memphis, MO.

James was born August 4, 1931 at home in Wyaconda, a son of Ernest and Marye White Robertson.

On December 9, 1951, he was united in marriage to Joy B. Young at the Wayland Methodist Church.

Jim was a member of the Wyaconda Baptist Church and the Masons.

Jim farmed all of his life in Clark County. He was Race Marshall for the Clark Co. Fair for 25 years and led the race horses onto the track. He also participated in Trail Rides all over the western United States and was a member of the Wyaconda Trailblazers Saddle Club and of the Illinois Ridge Riders. He was known as "the mule man" and a lot of people were fortunate to get a chance to ride his mules. He had served on the former Wyaconda School Board and on the Wyaconda Cemetery Board.

His family was very important to him and the times they shared together.

Funeral services were held Monday, April 30, 2018 at 10 a.m. at Wilson Funeral Home in Kahoka. Burial followed in the Wyaconda Cemetery.

Memorials are suggested to the Wyaconda Cemetery Association.

To send a flower arrangement to the family of James B. Robertson , please click here to visit our Sympathy Store.

Friends may call after 10 a.m. Sunday at Wilson Funeral Home with family receiving friends from 6-8 p.m. followed by a public Masonic Service.

Friends may call after 10 a.m. Sunday at Wilson Funeral Home with family receiving friends from 6-8 p.m. followed by a public Masonic Service.

To order memorial trees or send flowers to the family in memory of James Robertson, please visit our flower store.