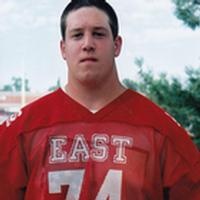 Survivors include his parents, Darrel and Ronda Nance of Kahoka, MO and Rhonda Marsden and Weston Smith of Wyaconda, MO; his children, Cale and Alexys Nance of Cheyenne, WY; a brother, Cody Nance of Kahoka; a sister, Jessica (Michael) Holtzscher of Kansas City, MO; grandmothers: Mary Clem of Kahoka, Beverly Miller of Waverly, IA and Mary Cassady of Novinger, MO; aunts and uncles: Earl (Carrie) Nance and Gary Nance, all of Kahoka, MO; and Brenda Miller and Rodney Miller, both of Waverly, IA; as well as great aunts and uncles, cousins, and other relatives.

He was preceded in death by his grandparents, Norman Nance and Ronald Miller.

Jacob was a 2003 graduate of Clark County R-1 High School and received his Bachelor's Degree in PE from Culver Stockton College. He played football in high school and represented Clark Co. R-1 in the East Game and in the Lion's Club All-Star Game. He was a member of the Wildcats at Culver Stockton College for several years and following several concussions, coached the last two years. He was on the coaching staff at Clark Co. R-1 until this past year. He also played semi-pro football in Hannibal. Football was his passion and all he ever desired to do. He was also a talented and gifted artist.

Jacob was a former manager of Blimpies in Kahoka and the Sonic Restaurant in Keokuk. He suffered from health issues related to his concussions which were becoming more apparent.

He was devoted to the sport of football and enjoyed mentoring and encouraging his teams as well as his brother, Cody, whom he dearly loved. He enjoyed getting together with a group of friends and playing flag football on weekends. Jacob was a gentle giant with a heart of gold. He had a special bond with his sister, Jessica, and loved spending time with her and her husband, Michael.

Memorials are suggested to the Clark Co. Football Association.

Friends may call at Wilson Funeral Home after 9 a.m. on Wednesday, family receiving friends from 5-8 p.m.

Friends may call at Wilson Funeral Home after 9 a.m. on Wednesday, family receiving friends from 5-8 p.m.

To order memorial trees or send flowers to the family in memory of Jacob Nance, please visit our flower store.