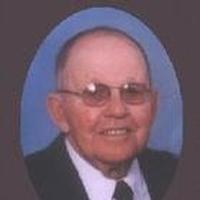 Joseph Dean Wood was born on March 25, 1921 on the family farm near Peaksville, MO, the

On May 18, 1950 he and Ruby Pauline Hunziker were married in Springfield, Mo by Rev. Hugh Isabell.

Dean graduated from Revere High School in 1939. After high school he trimmed trees around

the Midwest. He was a veteran of World War II having served in the Japanese theater. His unit was

one of the first units to arrive in Japan after the atomic bombing.

After the war, Dean and his brothers operated a Sinclair service station in Kahoka. He then

they would name Wood's Packaged Liquor and Fireworks. They would serve the public until 1992 when they closed the station. They continued to run the fireworks business until 2007 when the new road

was opened and the old Highway 61 was closed. Dean felt the best part of the business was meeting the public and sharing in their life experiences. It was said that many a problem was solved over a cold

bottle of soda pop while standing around and loafing.

He is survived by his wife of almost 60 years Pauline, son Ronnie (Ryanne) of rural Canton;

(Gladys) Hunziker of Hamilton, IL, nieces, nephews and other relatives.

He was preceded in death by his parents and brothers, Dale (Tina) and Stuart (Alberta).

Memorials are suggested to the Peaksville Christian Church.

To order memorial trees or send flowers to the family in memory of J. Wood, please visit our flower store.