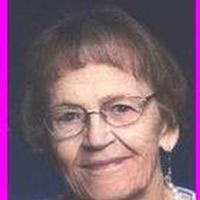 Irma was born November 23, 1921 at Clinton, IA, a daughter of Henry and Bertha Gnatz Jansen.

She graduated in 1939 from DeWitt High School, a year ahead of her future spouse, Edward. She was employed until her marriage at Iowa Mutual Insurance. She was a member of the U. S. Coast Guard during World War II.

On September 14 1947, she and Edward K. Vance were united in marriage at DeWitt, IA and moved to a farm near Revere where they made their home for over 55 years when they moved to Kahoka.

She was preceded in death by her parents; a son, Mark Henry Vance; and a sister, Sylvia Toerber.

Most of Irma's life was spent as a farm wife and homemaker. In later years she worked at Sacred Heart Hospital in Fort Madison, retiring from Clark Co. R-1 School where she was Junior High Librarian.

Irma was a member of Peaksville Christian Church, serving as organist and then pianist for many years. She was a member of Christian Women's Fellowship. She was a member of the former Ladies' Aid Organization at Athens and had been a member of an Extension Club. She was a talented musician who shared her talents with many, playing guitar, dulcimer, harpsichord and accordion in addition to the piano and organ. She was an excellent seamstress and enjoyed quilting, putting in a large garden, watching hummingbirds, camping and playing cards. Camping trips and games of rummy were special times spent with family.

Funeral services were held Wednesday, July 13, 2011, at 10:30 a.m. at the Peaksville Christian Church with Pastor Shawn McAfee officiating. Burial with military rites was in the Revere Cemetery.

Memorials were suggested to the Peaksville Christian Church.

To order memorial trees or send flowers to the family in memory of Irma Vance, please visit our flower store.