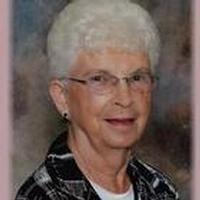 Irene was born April 30, 1932 in Kahoka, MO, the daughter of Orlanda and Edna Hess Muhrer.

She was preceded in death by her parents; her husband; and sisters-in-law and brothers-in-law, Jean Brunk, Ronald Brunk, Larry Brunk and Rosemary Moore.

Irene was a 1950 graduate of Kahoka High School. Following graduation she was employed at the former Sheaffer Pen in Fort Madison during which time she met her future husband, Jerry. They farmed in Clark County following their marriage, where she was farm wife and mother. She retired from Clark Co. R-1 School District where she cooked for many years.

Irene was a faithful member of St. Paul United Church of Christ in Kahoka and was involved in various committees, ministries, and organizations, including the courtesy committee for many years. She was a perfectionist when it came to quilting, noting that she would know if there was an incorrect stitch even if no one else did. She belonged to the Common Threads stitch club at the Kahoka Christian Church, making blankets for the "Linus Project" and other charities. She was an excellent cook and well known for making cookies to share with neighbors and family. Weekly she would send care packages to her grandson, Lane, while he was serving in Iraq which he would share with friends, always looking forward to the next week when they would receive another one.

Jerry was a charter member of the Kahoka Lion's Club and Irene was right beside him
whenever they were making and selling ice cream to raise money to help others.
She was an avid sports fan and was on the third generation of her family attending as many of their activities as possible, traveling to several games in different towns often on the same day.
She enjoyed watching sports on TV, particularly the St. Louis Cardinals and Missouri Tigers.
Her love for her family was second only to her faith.

Funeral services were held Monday, October 28, 2013 at 10 a.m. at St. Paul United Church of Christ in Kahoka with the Rev. Dixie Laube officiating. Burial was in the St. Paul Cemetery.

Memorials in lieu of flowers are suggested to St. Paul United Church of Christ or the Clark Co. Senior Center.

To send a flower arrangement to the family of Irene E. Brunk , please click here to visit our Sympathy Store.

To order memorial trees or send flowers to the family in memory of Irene Brunk, please visit our flower store.