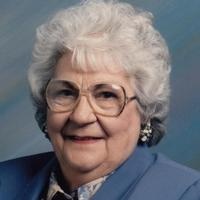 She was born July 12, 1920 in Clark County, MO, a daughter of Clifford and Ruth Beard Fish.

She was preceded in death by her parents and her husband.

She worked for several attorneys in Kahoka and St. Louis following graduation, and during World War II worked for the government in the Department of War doing clerical work from her home office base in St. Louis and in Detroit. She was employed by Martin Implement in Kahoka and later by the Clark Co. R-1 School District where she was secretary to the superintendent and treasurer of the school board. She worked a brief time for Fish Apparel and for the Clark Co. Health Department. For 9 years she ran the Nearly New Shop in Kahoka. She also babysat every one of her grandchildren.

Imogene was a life-time member of the Kahoka Christian Church, a member of the Christian Women's Fellowship and of the church choir. She was a charter member of the Red Hat Grannies and enjoyed her friends and fellowship together. She was a life-long democrat, a night owl, a Cardinal’s fan and a canasta and pitch fan. Imogene lived life to it’s fullest and with the help of her family was able to enjoy being at home until the very end.

Memorials are suggested to the Christian Women’s Fellowship (CWF) of the Kahoka Christian Church.

To order memorial trees or send flowers to the family in memory of Imogene Schaaf, please visit our flower store.