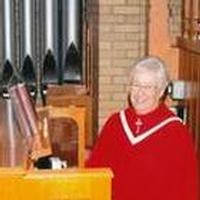 She was preceded in death by her parents and father-in-law, Laverne Ross.

She was a stay at home mom and occasionally reluctantly helped Larry on the farm by working ground or feeding livestock and running errands. According to Ida, her biggest contribution was delivery of homemade hamburgers to the fields at noon.

At the age of eleven, Ida became a church organist at the original First Baptist Church in Wayland, MO, and in 1976 became church organist for the St. Paul United Church of Christ in Kahoka. In addition, she was the director of the St. Paul Children's Choir and of the former youth choir. She was instrumental in encouraging many of the youth through the years in glorifying God through their music and through their faith.

Ida was piano accompanist for the Mark Twain Chorale, a group of local singers who traveled extensively in Europe, giving concerts in Austria, Germany, Ireland, England, Italy and Switzerland over a period of several years.

Her greatest pride was watching her children grow up and become productive members of the community and her greatest joy was her grandchildren.

Funeral services were held Sunday, December 8, 2013 at 2 p.m. at St. Paul United Church of Christ in Kahoka with the Rev. Dixie Laube officiating.

Memorials are suggested to the St. Paul United Church of Christ or the Clark County R-1 Band (for Washington trip).

To send a flower arrangement to the family of Ida Lou Ross , please click here to visit our Sympathy Store.

To order memorial trees or send flowers to the family in memory of Ida Ross, please visit our flower store.