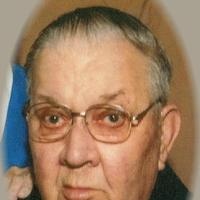 Herb was born January 30, 1931, in Kahoka, MO, the oldest child of Victor and Ina Collins Brookhart.

Survivors include his wife, Pattie, of the home; one daughter, Debra P. Brookhart of Indianapolis, IN; a dear friend whom he and Pattie consider their "second daughter", Sarah Yancy of Cincinnati, OH; a brother, Jerry (Cherilyn) Brookhart of Burlington, IA; a sister, Eva Jean White of Waukee, IA; brother-in-law, Dean (Dianne) Booth of Kirksville, MO; a foster sister-in-law, Pearl (Gene) Spurgeon of Arnold, MO; foster brother-in-law, Jack (Cheryl) Rennaker of Branson, MO, as well as nieces, nephews, and other relatives.

A graduate of Wyaconda High School, Herb lived in the Kahoka/Wyaconda area until moving to Memphis in 2006 where he was a member and deacon of the First Baptist Church.

Herb was self employed prior to his marriage and then went to work for Martin’s Service Station in Kahoka and then for the Clark County High School. In 1977 he began employment at Sheller-Globe, retiring in 1994. The next several years he did some yard mowing in his spare time.

Herb loved to visit the Scotland County Care Center in Memphis, sharing his love of his Lord and Savior. He also made the residents laugh and enjoyed making their days a little bit brighter. Not only was he a "fisher of men", but in earlier days wonderful quality time was spent with Debbie and Pattie on their fishing adventures. His family was his joy and delight.

Funeral services will be held Wednesday, March 22, 2017 at 10:30 a.m. at the First Baptist Church in Memphis, MO with Revs. Dan Hite and Eugene Spurgeon officiating. Following the service, lunch will be held at the church with burial at 1:30 p.m. in the Kahoka Cemetery in Kahoka.

Friends may call at Wilson Funeral Home in Kahoka after 9 a.m. Tuesday with family receiving friends from 5-7 p.m. The family will also receive friends from 9:30 a.m. until services at 10:30 a.m. on Wednesday at the First Baptist Church in Memphis.

To order memorial trees or send flowers to the family in memory of Herbert Brookhart, please visit our flower store.