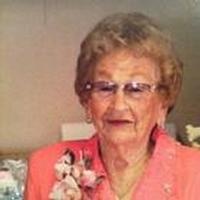 She was preceded in death by her husband; her parents; and one brother, Roland Worrell.

Helen was a graduate of Revere High School. Following their marriage, Helen and Wendell moved to Michigan for six years, returning to Clark County, Missouri where they farmed until retirement. They retired to Fairfield Bay, AR until Wendell's death, and then Helen returned to Kahoka in 1998.

Helen was a faithful and dedicated member of the Kahoka Christian Church. She was active in CWF, the 50/50 class and served as Deaconess. She enjoyed singing in the choir until recent years. Helen took special pride in her gardening. Her flowers were her passion, especially her pink petunias and zinnias. Sewing was another hobby. She was involved in all the farming activities. She also enjoyed cooking and hosting which ranged from picnics on the river bank to dinners for farm hands in the field, to receptions in the area, and state functions.

Memorial services will be held Saturday, August 2, 2014 at 1 p.m. at the Kahoka Christian Church with Rev. Jim Campbell officiating. Interment was in the Kahoka Cemetery.

In lieu of flowers, memorials may be made to the Kahoka Christian Church or the Kahoka Cemetery.

To send a flower arrangement to the family of Helen T. Martin , please click here to visit our Sympathy Store.

To order memorial trees or send flowers to the family in memory of Helen Martin, please visit our flower store.