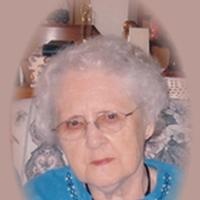 Helen Marjorie LaFrenz Elam, the only child of Virgil B. and Lottie Turner LaFrenz, was born June 27, 1928 in Kirksville, MO, and passed away on Wednesday, June 8, 2016 at Scotland Co. Memorial Hospital in Memphis, MO.

Helen spent most of her life in and near Wyaconda. She attended Wyaconda High School, graduating with the class of 1946.

On May 26, 1946, she was united in marriage to Oliver R. Elam at the Kahoka Christian Church parsonage. He preceded her in death on October 25, 2001 following 55 years of marriage. To this union one son, Virgil R. Elam, was born.

She was preceded in death by her parents and husband.

Helen and Oliver lived in LaPlata, MO for 20 years. During that time she was employed at Hollister, Inc. in Kirksville for 17 years. Following retirement, they went home to Wyaconda to live in 1982 until they moved to Kahoka in 1997 as Oliver's health began to fail.

Helen was a longtime member of the Wyaconda Christian Church and taught Sunday School and Bible school faithfully for many years.

Helen had been an active member of the Clark County D.A.R. as long as her health permitted. She was the "go to girl" to anyone wanting to know about family history and was an authority on the history of Wyaconda. She loved her family and friends and whenever she would have time to visit took precedence over anything else. Through the years she made it her own special ministry to check in with shut-ins to see about their needs.

Friends called at Wilson Funeral Home after 9 a.m. Friday with family receiving friends from 12:30 p.m. until time of services.

Memorials are suggested to the Wyaconda Cemetery Assn.

To order memorial trees or send flowers to the family in memory of Helen Elam, please visit our flower store.