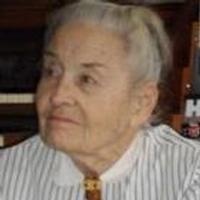 Hazel was born December 7, 1920, near Kahoka, MO a daughter of James and Anna McCollum Hicks.

She graduated from Fort Madison High School and was employed at Shaeffer Pen until
her marriage to George T. Martin on July 19, 1941. They were married in Ventura, CA, where George was serving in the military. This coming July they would have celebrated 72 years as husband and wife. She later worked in "ship service" while George was stationed in Jacksonville, FL.

She was preceded in death by her parents, sister, Leila Hess, and grandchildren Chad and Dane Martin and Katrina Ingold.

Hazel was a member of the Wyaconda United Methodist Church until it closed and then she and George transferred their membership to his boyhood church home, St. Paul United Church of Christ in Kahoka. They were faithful members of each and participated in the Sunday School as well. She was an auxiliary member of the American Legion and Retired Mail Carriers. She also involved in many of George's activities in conjunction with his memberships in the Southeast IA Gas Engine Club, Southeast IA Model T Club, and the small engine shows he participated in.

Hazel was content to be a homemaker. She loved caring for her home, her huge garden and lovely flowerbeds that surrounded it. She and George's travels included 48 states, 11 foreign counties, and the Provinces of Canada. The life they shared together represented their strong sense of faith, family, and respect for each other.

Funeral services will be held Monday, May 20, 2013 at 10:30 a.m. at Wilson Funeral Home in Kahoka with Pastor Barb Koenig officiating. Burial will follow in the Wyaconda Cemetery.

Friends may call at Wilson Funeral Home after 10 a.m. Sunday with family receiving friends from 5 until 7 p.m.

Memorials in lieu of flowers are suggested to the St. Paul United Church of Christ.

To send a flower arrangement to the family of Hazel R. Martin , please click here to visit our Sympathy Store.

To order memorial trees or send flowers to the family in memory of Hazel Martin, please visit our flower store.