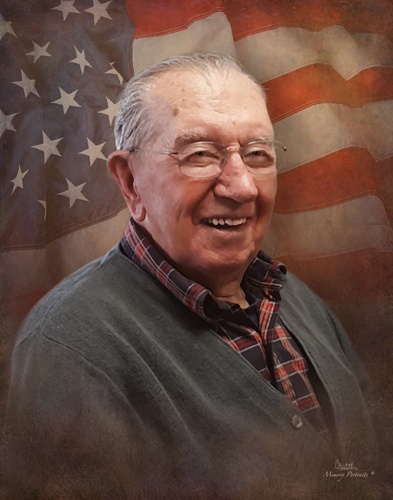 Harold was born on March 8, 1924 in Anson, the son of the late George and Julia (Nixon) Gares. He married Celesta Ball on October 25, 1947 in Kahoka and she passed away on October 11, 2018. He served in the United States Army Air Force during World War II from 1946-1947. He was also stationed in Japan for a period of seven months.

Mr. Gares began working for Hubinger’s in Keokuk in 1962 and retired in 1986. Harold was a member of the United Methodist Church in Kahoka and was a member of the American Legion Herman Blum Post #192. One of his favorite moments in recent times was the opportunity to take part in the Honor Flight with his best friend Donald Dieterich. Harold always liked keeping busy and enjoyed working.

He is survived by a daughter; Melody (Bruce) Uhlmeyer of Kahoka, three grandchildren; Dan (Brandy) Uhlmeyer of Shelbyville, Wesley (Jessica) Uhlmeyer of Columbia and Cheryl (Lute) Winkelman of Alexandria, eleven great-grandchildren and by a sister-in-law; Laneta Gares. Besides his wife and parents, Harold was preceded in death by a son; Harlan Gares, two sisters; Lola I. Gares and Velda Zollars, two brothers; Hilbert and Clifford Gares, brother in law; Cecil Zollars, sister in law; Lola Gares and by a brother and sister in law; Edwin and Joan Ball.

Funeral services honoring the life of Harold were conducted at 2:00 pm on Sunday, October 18, 2020 at the Wilson & Triplett Funeral Home in Kahoka. Pastor Franz Kinkhorst officiated. A visitation was held from noon until the time of services on Sunday. Private family interment will take place at a later date at Kahoka Cemetery. Due to the coronavirus epidemic, the family encourages those attending the visitation and service to practice social distancing and the use of a face mask  Memorial contributions in Harold’s memory are suggested to the Clark County Nursing Home or to the United Methodist Church of Kahoka. You are invited to share your memories of Harold and leave a condolence at www.wilsontriplett.com

To order memorial trees or send flowers to the family in memory of Harold Gares, please visit our flower store.