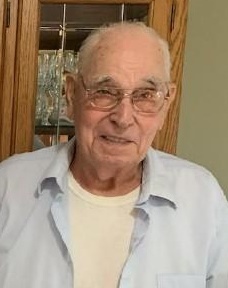 He was born on January 19, 1933, in Davis County, Iowa, the son of the late Arthur S. & Catherine (Millions) Roberts. Harlan married Marilyn Bruner on December 7, 1950, in Memphis, and she survives.

Mr. Roberts worked in the construction business for the majority of his life. He also worked as a mechanic for Donnellson Implement for over 25 years. Harlan was a member of Amazing Grace Church in Kahoka. He enjoyed working with wood and tinkering around in his shop. Harlan also enjoyed playing games like solitaire on his computer.

In addition to his wife of 71 years, Marilyn, he is survived by a son; Tony Jay (Cindy) of Broken Arrow, Oklahoma, two daughters; Nancy Kay Roberts of Fort Madison, Iowa and Barbara (Jim) Boyles of Nauvoo, Illinois, seventeen grandchildren, thirty-nine great grandchildren, ten great-great grandchildren, a sister; Jonna Nadine Cunningham of Bedford, Iowa, and by several nieces and nephews. Besides his parents, Harlan was preceded in death by a son; Bruce Oneil Roberts, a grandchild; Shala, two brothers; Arthur Ivan and Garland and by four sisters; June, Viola, Mary and Edith.

Memorial graveside service honoring Harlan’s life will be held Monday, September 12, 2022, at 1:00pm at the Kahoka Cemetery. The Wilson & Triplett Funeral Home in Kahoka has been entrusted with the care and arrangements. Memorial contributions in memory of Harlan are suggested to Shriner’s Children’s Hospital of St. Louis. You are invited to share your memories of Harlan and leave a condolence at www.wilsontriplett.com

To order memorial trees or send flowers to the family in memory of Harlan Roberts, please visit our flower store.