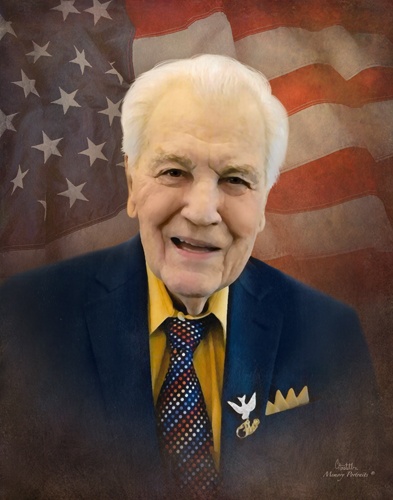 He was born on October 16, 1927 in Sedalia Missouri, the son of the late Charles A. & Adaline M. (Bidwell) Gamber. Harlan served in World War II as a Merchant Marine in the European Theater. He married Lula Brownfield and to this union three children were born, he later married Judy (Ramsey) Gamber on December 6, 1972, in Perryville, MO, one child was born to this union.

Harlan was a devoted Christian man, being a pastor in Mattoon IL, Warsaw IL, Linton IN, Pampa TX, and traveled many places to preach God’s word. He was a jack of all trades, working in multiple different skill areas throughout his life. Harlan loved playing pool and had a coin collection he admired greatly. One of his favorite past times was singing and playing guitar with his friends, often playing in churches and care homes around the Kahoka and Keokuk area.

Funeral services honoring the life of Harlan were conducted at 11:00 am on Friday, February 12, 2021 at the Wilson & Triplett Funeral Home in Kahoka. A visitation was held from 10:00 am until the time of services on Friday. Interment followed in the Keokuk National Cemetery in Keokuk, IA. James Austin and Marilyn Curtis officiated the service.  Memorial contributions in memory of Harlan Gamber  were suggested to the family with checks payable to Wayne Marple. You are invited to share your memories of Harlan and leave a condolence at www.wilsontriplett.com

To order memorial trees or send flowers to the family in memory of Harlan Gamber, please visit our flower store.