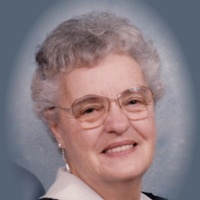 She was preceded in death by her parents; her husband; one son, Harold Raymond "Bub" Campbell and his wife, Joyce.

Grace attended school in Keokuk. Most of her life was spent as a farm wife, working beside Mike on the family farm and tending to her family’s needs. Later she opened the Campbell One Stop Restaurant in Wayland which she ran for a few years.

Grace loved to travel. Her faith and love for people led her to witness to others wherever she went. She was a member of the Gideon’s Auxiliary and she and Wayne led a jail ministry and also made many mission trips to Rapid City, SD, to deliver clothes to the Indians.

Funeral services were held Sunday, August 5, 2018 at 4 p.m. at Wilson Funeral Home in Kahoka with Pastor Shawn McAfee officiating. Cremation will follow with inurnment in the Oakwood Cemetery in Hamilton, IL at a later date.

Memorials may be made to the Wayne and Grace Hodges Scholarship Fund (which will be established).

To send a flower arrangement to the family of Grace Evelyn Hodges , please click here to visit our Sympathy Store.

Friends may call at Wilson Funeral Home after 10 a.m. Sunday with family receiving friends from 2-4 p.m.

Friends may call at Wilson Funeral Home after 10 a.m. Sunday with family receiving friends from 2-4 p.m.

To order memorial trees or send flowers to the family in memory of Grace Hodges, please visit our flower store.