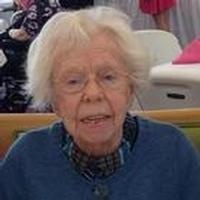 Gladys Evelyn Bailey of Lenexa, KS, formerly of Kahoka, MO, passed away on Wednesday, September 24, 2014 in Lenexa. Gladys had celebrated her 100th birthday in November of 2013 and was in good health until the last couple of months.

Gladys was born to Paul Friest and Sophia Holt Friest in Radcliffe, IA, on Thanksgiving Day, November 27, 1913. She graduated from the Iowa State University with a degree in Home Economics and taught for many years in Iowa and in Kahoka for 17 years. Each year she would hold a style show for her students to show the public their items they had made in Home Ec. During this time she was also FHA Advisor and helped the students run the concession stand at ballgames.

On June 18,1940 she was united in marriage to Leland Verne Bailey in Ames, IA and they were happily married for 60 years.

Gladys enjoyed sewing, cooking and spending time with her family and friends. She loved to travel and had been to all 50 states as well as many European countries including her ancestral home of Norway. She was an active member of the Tuesday Club. She was also on the building committee for the Kahoka United Methodist Church. In her later years, she and Lee enjoyed living in Brownsville, TX during the winters and spent time in Grand Marais, MN during the summers. Besides being a great wife, teacher, homemaker and world traveler, she was also the best mother, sister, grandmother, great-grandmother, and mother-in-law you that you could find!

Other surviving family members are her brothers, Warren Friest (Ardene) of Rockford, IL and Richard Friest (Betty) of Anchorage, AK and numerous nieces and nephews.

Preceding her in death were her parents, her husband Lee, and two brothers, Allan Friest and Don Friest.

Memorials are suggested to the Kahoka United Methodist Church.

To send a flower arrangement to the family of Gladys Evelyn Bailey , please click here to visit our Sympathy Store.

To order memorial trees or send flowers to the family in memory of Gladys Bailey, please visit our flower store.