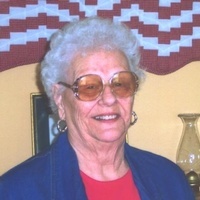 Mrs. Geraldine Leach, 90 of Evans, Georgia died Sunday, November 5th, 2017 at Thomson Heath and Rehabilitation in Thomson, Georgia. She was proceeded in death by her husband, Floyd Delmer Leach and a son, Lewin Dee Leach.

Geraldine was born in Missouri on April 8th, 1927 to Levi Abbott Barrows and Marie Amelia Wollam Barrows. She spent her early years in Kahoka, Missouri where she graduated from Kahoka High School. Geraldine and Floyd were married in Kirksville, Missouri on December 7th, 1946.

She was a member of First Baptist Church of Evans, Georgia where she was involved with the Adult Sunday School class. She made great friends at her Silver Sneakers exercise class and enjoyed crossword puzzles and spending time with her family and friends. She was a past Worthy Matron of Kahoka Chapter # 40, O.E.S. and past Mother Advisor of Rainbow for Girls.

In addition to her husband and infant son, she was preceded in death by her parents and her siblings: Harold Leroy Barrows, Thera Allen Barrows, Lester Howard Barrows, Norman Mark Barrows, Carolyn Kay Barrows Doeing Underwood and Ina Lou Barrows Wendling Wray. She was also preceded in death by a sister-in-law: Sandra Jane Russell Barrows.

A memorial was held on Saturday, December 9th at 2pm at Wilson Funeral Home. Family received friends from 1 p.m. on Saturday until time of services. Music included: "In The Garden", "Amazing Grace" and "I Have A Dream".

If desired, memorials may be made to the Paul Rowe Historical Museum, 252 N. Morgan Street Kahoka, Missouri 63445.

To send a flower arrangement to the family of Geraldine Barrows Leach , please click here to visit our Sympathy Store.

To order memorial trees or send flowers to the family in memory of Geraldine Leach, please visit our flower store.