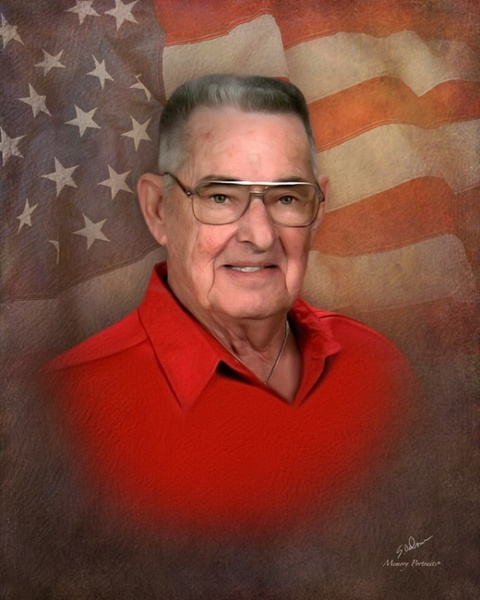 He was united in marriage to Jeannette Frances Brown on February 18, 1955 at Central Baptist Church in Quincy, IL.  She proceeded him in death on December 27, 2017.

Wayne was born March 3, 1931 on the Rolling R Ranch north of Luray to George and Ida May (Shannan) Wagner.   He grew up on a farm south of Wyaconda with his mother and stepfather Russell Webster.  He attended eight years at the Mt. Tabor one-room school. At the age of fourteen, he moved to Memphis to live with his grandparents, Wayne and Nellie Wagner,  then graduated from Memphis High School in 1949.

He enlisted in the Navy during the Korean War, serving aboard destroyers USS Carpenter (DDE 825) and USS Blue (DD 744).

Returning home in 1954, he started farming with his step dad and mom.  After the birth of his first child, he reenlisted in the Navy.  Now a Petty Officer with a young family, he had a more enjoyable tour on shore duty at fleet headquarters in Pearl Harbor, HI.  He participated in a nuclear test on Christmas Island in 1962.  Other assignments took the family overseas to Paris, France and Ankara, Turkey before he retired with twenty years total service.

Following his retirement, the family returned to Luray, MO where they lived for thirty-four years.  He worked several jobs including a route salesman for Morman Feeds, until he got on as a rural mail carrier out of the Wyaconda post office.  In 2005, they sold the home place and moved to Kahoka.

Wayne was an avid hunter and fisherman.  He enjoyed traveling; especially on mission trips to Wyoming with the First Baptist Church and a month-long road trip to Alaska.  He was active in local veteran’s affairs, serving on the military honors detail with American Legion Post 192.

He was proceeded in death by his wife, parents, one son David Leon Wagner, and a half sister Louise Webster Roth.

Private graveside services honoring the life of George were conducted at Combs Cemetery in Luray. A public visitation was held from 10 AM until 12 PM on Saturday, January 16, 2021 at the Wilson & Triplett Funeral Home in Kahoka. Memorial contributions in memory of George were suggested to the Scotland County Care Center in Memphis. You are invited to share your memories of George and leave a condolence at www.wilsontriplett.com

To order memorial trees or send flowers to the family in memory of George Wagner, please visit our flower store.