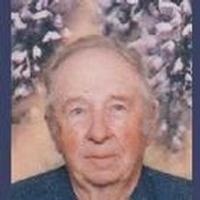 George was born October 20, 1922, in Keokuk, IA, the son of George Lambert and Elnora Milligan Seyb.

He married Guenn Leithauser on July 15, 1945 at Canyon, TX and they were the parents of Lee Ellen and Mark. She preceded him in death on June 27, 1997. On December 8, 2006, he married Patty Lynn Blakely, mother of his children, George and Bobby.

He was preceded in death by his parents; his wife, Guenn; and granddaughter, Allison Lee Seyb on March 22, 1991.

George attended grade school at Ashton, graduating from Kahoka High School. He was baptized and confirmed at St. Paul United Church of Christ. During World War II he was a glider pilot in the Army Air Corp. He continued flying for many years later. He was a former member of the American Legion and former 32nd degree Mason in the Eldorado Lodge at Luray.

George and Guenn owned the Wyaconda Machine Co. for many years. He also farmed most of his life near Wyaconda. He loved listening to country music.

Graveside services with military rites will be held Thursday, December 15, 2011 at 2 p.m.the National Cemetery in Keokuk, IA. Family will receive friends from 12:30 until 1:30 p.m. at Wilson Funeral Home in Kahoka.

To order memorial trees or send flowers to the family in memory of George Seyb, please visit our flower store.