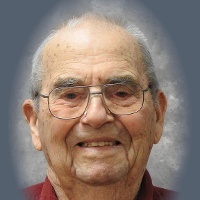 He was preceded in death by his parents; his wife; three grandchildren: Chad and Dane Martin and Katrina Ingold; and three brothers: Robert, Paul and Joe Martin.

George graduated from Kahoka High School in 1936 and attended Kirksville State Teacher’s College for a year. He was employed by the Santa Fe Railroad in Fort Madison prior to entering the U. S. Navy. Following his discharge he worked for Douglas Aircraft in Los Angeles, CA until transferring to their Tulsa, OK location. Hazel was left a farm near Gorin so they returned to Missouri to farm and eventually bought their present farm in Clark County, MO in 1950 and in addition became a rural mail carrier for 27 years.

George was an intelligent and enterprising man. He was a member of the Southeast Iowa Gas Engine Club, IAILMO Tin Lizzie Club, and a contributor and exhibitor at Midwest Old Threshers and had exhibited antique gas engines which he had restored at many local events over several decades. He moved the old Wyaconda depot to his farm piece by piece and stored his engines and enjoyed showing them to everyone.

He cut down 27 different variety of trees and made a beautiful mantel and hardwood floors in his home he and Hazel were so proud of. He also collected Indian relics and artifacts and model railroads. Additional memberships included the Herman Blum Post # 192 of the American Legion and Ayer-Boatman Post # 4342, V.F.W. both of Kahoka.

He and Hazel loved to travel all throughout the U.S. as well as most of the Canadian provinces. They also loved to travel internationally and on railroad excursions in various parts of the U.S.

He was a member of the St. Paul United Church of Christ as a child and returned to his roots following the closing of the Wyaconda Methodist Church.

Burial followed in the Wyaconda Cemetery.

Memorials are suggested to the St. Paul United Church of Christ or the Clark Co. Nursing Home Activity Fund.

To send a flower arrangement to the family of George T. Martin , please click here to visit our Sympathy Store.

To order memorial trees or send flowers to the family in memory of George Martin, please visit our flower store.