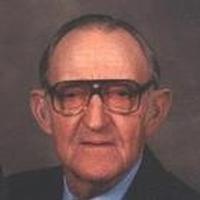 He was born October 19, 1909, near Apache, Oklahoma, one of three sons of Arthur and Nettie Pohlmann Heinze and the last grandchild of George Federick Pohlmann.

George came to Clark County in 1912 with his parents and his brother, Karl, and remained in Clark County for the rest of his life.

Following their marriage they lived on a farm north of Kahoka until moving into town in 1995.

He was preceded in death by his wife, Vera, in March of 2004; his parents; and brothers, Karl and Roland.

He is survived by several cousins.

George was a member of the E & R Church. He was self educated and a hard worker.

He had loved being on the farm and caring for his cattle.

Burial was in the St. Paul Cemetery.

To order memorial trees or send flowers to the family in memory of George Heinze, please visit our flower store.